Readers have started to ask about a term that I use regarding Shodai, and what seems to be a preferred technique of his. I call this “Wall of Daikon”. it’s a quasi defensive strategy that takes advantage of his giant pasty body, that looks somewhat like an animated daikon radish.  That might be enough for some, but the links to daikon run deep with him.  Read on…

Shodai’s university is the Tokyo University of Agriculture and Technology, If I recall. I think he has a kesho-mawashi with the school mascot on it somewhere. They have some kind of Daikon odori / matsuri sort of thing – see here: 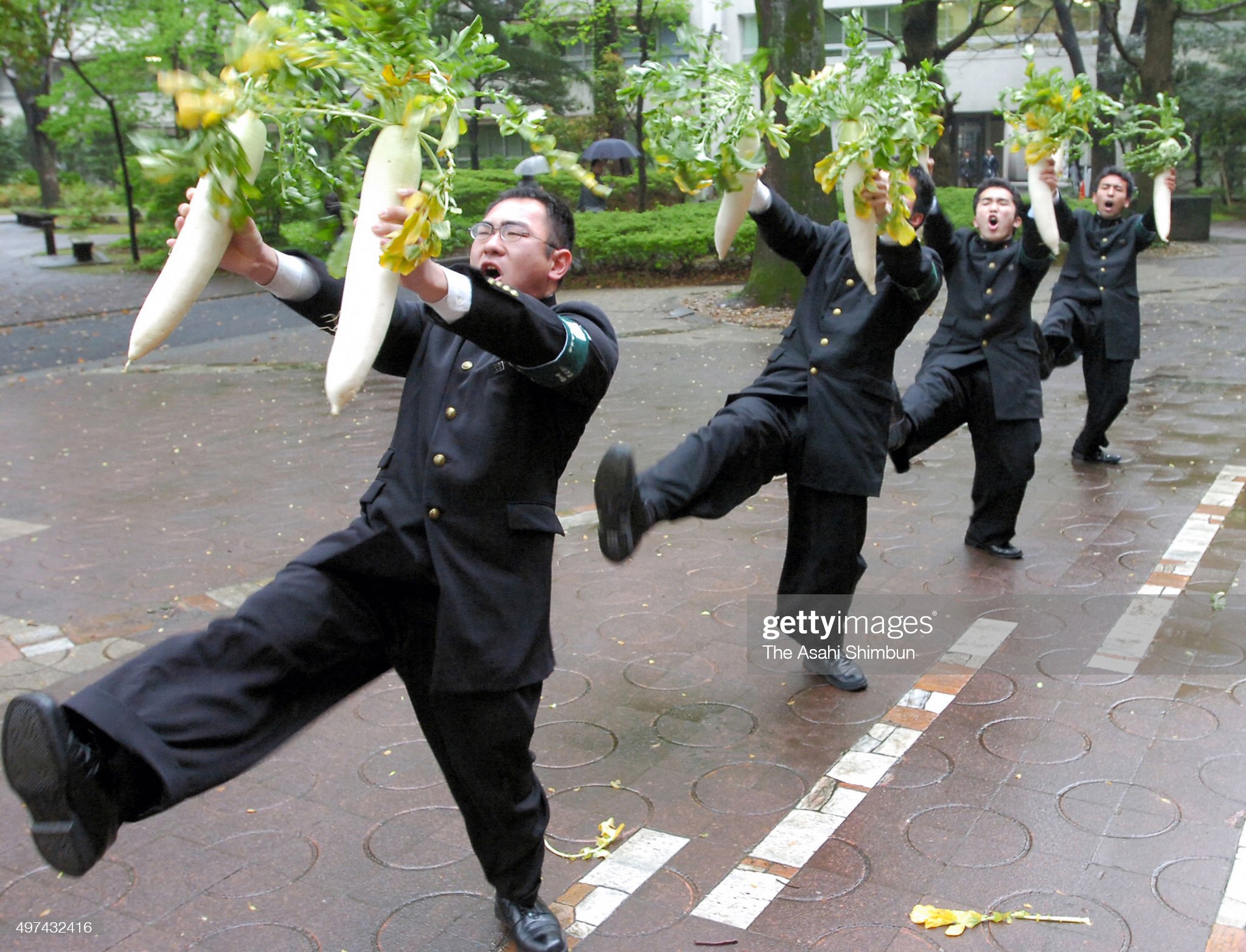 Try as I might, I can’t divorce myself from thinking these guys are trying to energize Shodai with whatever genki power they can summon from these hapless vegetables that escaped from a green market somewhere in Tokyo.

He’s also really large, broad and kind of pasty, and looks a bit like an anthropomorphic daikon. He has adopted a mostly defensive style of sumo, with the centerpiece being using his large body as an enormous blunt object to crowd, strike and shove his opponents out. I thought about calling it a “Brick wall” tactic, but that was not very Nihon-centric, and also did not quite fit. Then the whole daikon angle came together, and it just seemed to fit.

So when you see me writing about the “Wall of Daikon”, it’s Shodai executing his defensive, body-centric sumo strategy well.

Wait, what? the picture was not enough? Ok, how about some video?

Hello dear readers and fans of Tachiai. Wow, so glad I can be here for the January tournament with all of you, and I am very excited for the 15 days of sumo that are about to unfold. What a time it’s been since I last took to the pages of my favorite blog – from illness to loss of internet services to “off the charts” demand at work. I am well ready for some sumo!

First, apologies for lack of video leading up to this basho. There simply was not time this past few weeks to pull it off. We will try to make it up to you in the gap between now and March. But there is so much great content out there between Sumo Kaboom, Grand Sumo Breakdown, and the master himself, Jason’s YouTube Channel, I am sure most of you had no shortage of sumo content to enjoy.

Where am I focused this basho? Frankly, on the health of the rikishi. I can tell all of you first hand that the Omicron variant, while not as damaging as our old pal Delta, spreads like wildfire. Frankly, more than any time since March of 2020, I am worried that this basho may get shut down by an outbreak. I am full of hope that the NSK’s protocols can keep the athletes, the officials and the fans safe, but this Omicron variant is a fast spreader.

But let’s assume that the NSK gets it right – both the Ozeki had winning records last time out, so no kadoban – that’s great news. Terunofuji has to be a favorite to dominate the ranks into week 2, and if he is healthy at day 10, he has to be the favorite to take the cup. I have seen some fans wondering about long suffering hopeful, Mitakeumi this time out. his last two were 9-6 and 11-4. Would they give him the nod with 12 wins this time? Not sure… but Mitakeumi with 12 wins? Every time he has broken above 11, he has taken the cup (Nagoya 2018, Aki 2019). The man has the tools and the skill, and we all hope he can put together a solid run. But it might be more reasonable for March.

I am thrilled that Oho and Wakamotoharu are making their top division debut. I think we are going to see some fun sumo from the two of them, and I hope that they can pull of the tradition debut performance spike that we see folks coming in from Juryo for the first time.

Sadly, my favorite Takayasu and long suffering stalwart Hidenoumi are sitting out this basho, for entirely different reasons. Takayasu due to COVID-kyujo, and Hidenoumi for what could be deep legal troubles.

But to my eye, the fire will be hottest at Maegashira 6, with Hoshoryu and Abi holding East and West at that rank. Just outside the joi-jin, they are going to be dealing a lot of damage down the banzuke, and spoiling matches for the top end of the rank and file. Dare we hope for Mitakeumi vs Abi?

Thank you again Tachiai readers for joining us and sharing our love of sumo. Onward to the tournament!

After going kyujo for one basho, the crystal ball is back! The new rankings will be announced and mailed to supporters on June 21. In advance of this much-awaited event, let’s take a look at how they are likely to shake out.

Here’s my banzuke guess. Scroll down to see which ranks I think it’s most likely to get wrong.

Starting from the top, it’s not a certainty that Terunofuji will leapfrog Takakeisho as a result of the outcome of their playoff bout. Also, it would only qualify as a minor surprise if Endo got the nod for the West Komusubi rank over Meisei. And Daieisho and Ichinojo could switch spots.

Then we come to the biggest question mark on the banzuke—who gets to fill the hole in the rankings at M3w/M4e. M3w is a toss-up between M12e Kotoeko (9-6) and M14w Chiyotairyu (10-5). I went with the former for two reasons. First, their ranks on the east and west side, respectively, give Kotoeko a half-rank edge “by the numbers.” Second, it allowed me to keep Kotoeko and Okinoumi, who posted the same records at the same rank, at similar banzuke positions; otherwise, they’d be separated by 3 full ranks. The banzuke committee could easily go the other way, or even increase the gap by placing Chiyotairyu at M4e and Okinoumi at M7e.

Further down, Aoiyama and Chiyoshoma could easily swap sides at M8, as could Kaisei and Tochinoshin at M11, and in fact any rearrangement of the quartet I placed at M11-M12 wouldn’t surprise me. M15 is another rank where the decision to place Tsurugisho on the East side and Chiyomaru on the West basically came down to a coin flip.

I feel pretty good about the rest of the guesses, but I’m always surprised by at least a couple of the banzuke committee decisions when the official rankings are released. We’ll get to see them in a week; in the meantime, feel free to speculate in the comments.

The 2021 Haru basho is in the books, and all the prizes have been handed out. How will the results reshuffle the rankings for the Natsu basho? As usual, I’ll have a full banzuke prediction posted once I’ve had more time for analysis, but here’s an early look at the key points.

Barring any unexpected further intai news, we will have Hakuho as the sole Yokozuna. The Ozeki ranks will see a reshuffle, with Asanoyama and Takakeisho, both 10-5, moving up to O1 East and West, respectively, newly kadoban Shodai falling to O2e, and re-promoted Terunofuji “debuting” at O2w.

All the other incumbents in lower san’yaku—S1w Takanosho, K1e Takayasu, K1w Mitakeumi, and K2w Daieisho are kachi-koshi. I think they’ll move up in tandem to S1e, S1w, K1e, and K1w, although there is a chance that Takayasu could leapfrog Takanosho (now there’s an image!).

Similar to the situation last time, we had three high-performing upper maegashira—M2e Hokutofuji (9-6), M2w Wakatakakage (10-5) and M3e Meisei (10-5), who would all deserve a san’yaku slot if any were available. The other upper maegashira all put up losing records that ranged from borderline to disastrous, and we have to go all the way down to M8w Tobizaru (10-5) to find the next winning record. This makes filling out this part of the banzuke a real challenge.

I think the least unfair way to accomodate the top trio is to place Wakatakakage at M1e (obviously), and then bump up Hokutofuji a measly half-a-rank to M1w, leaving Meisei, who really should be ahead of him, to settle for M2e. Tobizaru is then a lock for M2w, and remarkably, the surprise jun-yusho winner, M12w Aoiyama (11-4), is the best (and really only) candidate for M3e. What to do with M3w though? Here are your options, ladies and gentlemen: M9e Chiyonokuni, with 8 wins, M15w (!!!) Hidenoumi with 10, or M1w Onosho with his sterling 4-11 record. No, seriously, those are the best-placed rikishi, assuming they don’t promote someone with a losing record. Take your pick between a 5-rank over-promotion, a 7-rank over-promotion, or a 5-rank under-demotion.

Leaving the 7-8 M4 duo of Kiribayama and Myogiryu in place stops the bleeding a bit, but the choices for M5e, M5w, and M6e don’t look so hot either. After that, it’s two more 7-8 rikishi keeping their ranks—M6w Ichinojo and M7e Tochinoshin—and then the rankings return to some semblance of normalcy. And let’s not even think about what would need to happen if an extra Komusubi slot were created for Wakatakakage.

With a 9-man san’yaku, the M17e rank will reappear. And the exchanges should be pretty straightforward. Everyone in the top division finished with records that easily warrant a return, with the exception of M11 Kotoshoho (one win) and M15 Yutakayama (4-11). Those two demotions, plus Kakuryu’s retirement, open up three slots, and there are three clear promotion candidates: J2e Ishiura (9-6), J3e Chiyomaru (9-6), and J1w Akua (8-7). For the second basho in a row, no one will make a Makuuchi debut; before this March, we’ve had a newcomer in every tournament since Kyushu 2018. Just missing out on a return is M4e Enho (9-6), who will try again from the top spot in Juryo, where even 8 wins will be enough.

I’ll end this here, and cover what I think will happen in Juryo and upper Makushita after the new Juryo promotions are announced on Wednesday (it’s the only part of the banzuke we get to see early). Thanks for reading, and let me know what you think in the comments!