Skip to content
Home琴 (koto): An Excuse to Listen to Tool for the Rest of the Evening

Traditional Japanese instruments don’t get much attention in popular music. The koto is a great sounding instrument and is relevant to sumo because the kanji for Koto is used in the shikona of several wrestlers, generally from the Sadogatake heya, headed by former Kotonowaka (琴ノ若), including two ozeki – Kotoshogiku (琴奨菊) and Kotooshu (琴欧州). The heya was established in 1955 by Kotonishiki (琴錦). Please check out my brief post about the kanji for nishiki, 錦, from a few days ago. 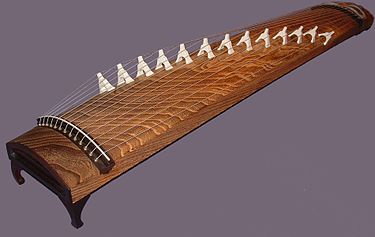 So, what is a koto? It is this stringed instrument, played with picks and the bridges can be moved to change the sound. I’ve not listened much to koto music, preferring the shamisen. If you haven’t heard the Yoshida Brothers play the shamisen, I encourage you to check them out…they’re amazing.

But back to the koto. Perhaps the most famous track, the sound of the koto was incorporated into Dr. Dre’s “Still Dre”. I know you’ve heard it. It’s really simple and very catchy. In college, that song was EVERYWHERE. However, my personal favorite is this cover of Tool’s “Lateralus” using a bunch of koto. I miss Maynard’s voice and the buzz of the guitars but this is fantastic. I love great rap tunes but I’m a huge metal head and I especially love prog metal from Tool, so after listening to the koto version I HAVE TO listen to Tool’s original. And then more Tool. This is really going to kill my evening because I will have to lie down and listen to their albums on a loop now.

3 thoughts on “琴 (koto): An Excuse to Listen to Tool for the Rest of the Evening”

This site uses Akismet to reduce spam. Learn how your comment data is processed.